For Florianopolis pictures click here. Some of the flash photos in this website were taken by the expert photographer Tony Galvez.

Enjoy relaxing on the beach, activities like surfing and hiking among other outdoor activities in Florianopolis, the island that at the same time that has all the comfort of a lively and developed urban centre, provides a close contact with nature. That is one of the reasons why it is the capital with the best quality of life in Brazil. The Sea, mountains, lagoons and a well preserved large portion of the Atlantic Forest, make up beautiful scenery. The island is about 90 km long and 18 km wide. “The nature has never gathered so much beauty” defines the city anthem. The 42 beaches of the city are its major attraction. And what such beaches! Surrounding the whole island – that is not at all small – there are more than hundred kilometers of coast, and one beach overcomes the other in terms of beauty in a fabulous sequence. There is a beach for every taste: Joaquina, for its perfect waves that fascinate surfers and for its high dunes at the back part of the beach, where the same surfers side by side with tourists are surfing on the dunes with sand boards; Campeche beach, a perfect place for your dream surf vacation in Brazil, and one of the favorite meeting points of the beautiful suntanned people in the island. There is such a big concentration of tanned persons that you feel as if you were on a TV advertisement. This beach has its biggest attractions just in front of it, in the middle of the sea: the Campeche Island, a sort of preserved natural park with such clear waters that boats seem to float in the air and bathers make shadows in the sand, deep in the sea. Still, the main treasure of Floripa is hiding somewhere else: the untouched beach of Lagoinha do Leste, considered one of the most beautiful beaches in Brazil. It is a fascinating place hidden between two mountains and there is no access to it through land. In the North of the island, you will find urban beaches and places full of foreigners, since Florianopolis has for some time been considered one of the main destinations for Argentineans, Chileans and Uruguayans, Brazil’s neighbours in South America.

Florianopolis is no longer a secret kept by Brazilians only. A little more to the South of these “international villages” let’s put it this way, there are other two beaches that confirm the fame the island has: the giant beach of Moçambique, that has 12 kilometers of length and very white sand, surrounded by a natural reserve, and Praia Mole, even more beautiful not only by its landscape: along with the Campeche beach, it is one of the main meeting points of young people in the island. The truth is, no matter where on the island you are, the beaches of Floripa have the biggest quantity of beautiful people per square meter in the country. It is a gift to the eyes, but it is not surprising anymore, because everything in there looks like a postcard. Starting from the symbol of the island, the Bridge Hercilio Luz, which is more than 100 years old and used to link the island to the continent in the past. Nowadays it is a nice scenery for tourists to take photographs. 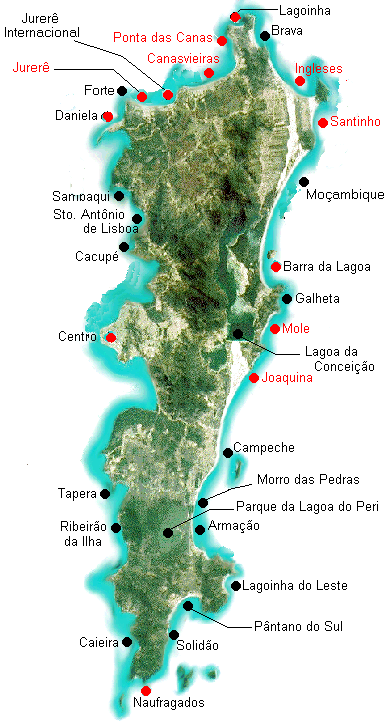 So you will ask yourself, does Florianopolis have only beaches? The answer is no! Besides having fisherman villages that seem to have stopped in time, such as Ribeirao da Ilha, Sambaqui and Santo Antonio de Lisboa (where the best oysters in the country are cultivated, and trying this shellfish together with shrimp becomes almost compulsory), almost 50% of the island is covered by the green of Mata Atlântica, a vegetation that is richer than the Amazon in terms of species. Because of that, Florianopolis has a kind of playground for nature lovers, with over 30 tracks, both marked and signalized. Surveys show that out of ten visitors, ten leave the place very happy and pleased. In many cases, they become so fascinated by the land of famous tennis player Gustavo Kuerten, that they justify the slogan of the island, that is known as The Island of Magic. Its beauty really puts a spell on people.